After several days of research and reading, we lightened the mood with the Food Web Game.  Students teamed up into groups of three, with each team receiving a container of rice.  The rice represented seeds, which comprised the base of our food chain.  One member of the team counted out 10 grains of rice and handed them to the runner who traded them in for one lentil.  The recorder wrote a tally mark to indicate they had received a lentil on a note card.  When the team reached 10 lentils, they traded those in for one white bean (representing a red fox).  The game ended when the first team was able to trade in 10 white beans for one black bean and then all members of the team had to howl like a wolf.  The game helped represent the energy it takes to sustain a single tertiary consumer, with energy loss represented by the energy students spent running back and forth during the activity. 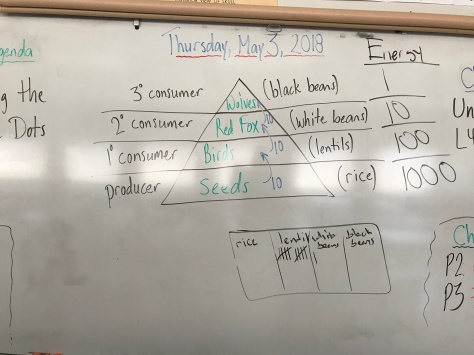