Chapter 3 began with a historical study of how early chemists used experimentation and reasoning to assemble models of the atom.  The Lesson 11 PowerPoint provides key vocabulary around the components of the atom (proton, electron, neutron, and nucleus).  In addition, we previewed the content in Lesson 12, introducing the concept of atomic mass (to go with atomic number) and noticing that by subtracting atomic number (the number of protons in an atom) from atomic mass (the sum of an atom’s protons and neutrons), we can calculate the number of neutrons in the nucleus of an atom.

To go along with the Lesson 11 Worksheet, students also received a handout explaining the five models of the atom.  For homework, students should complete questions 1-4 and 7-9 from the end of Lesson 11 in the textbook. 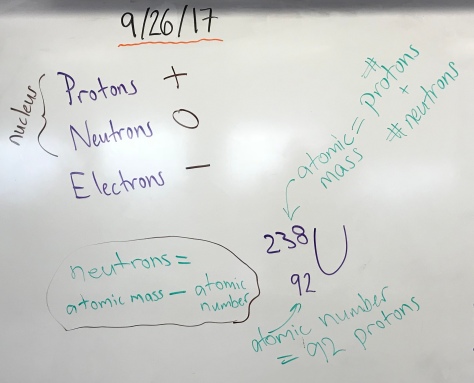