Last week, students were introduced to body systems.  They watched a video showing how the human body reacts under extreme conditions, and then researched body systems involved in the scenarios they saw in the video.  This week, we began with a reading from the class textbook.  The reading introduces students to the concept of homeostasis and feedback loops, while introducing those feedback loops in the context of specific body systems.  Students read page 177, and then pages 229-236, answering questions 2a-d on page 178.  Students finishing early also answered question 3, and then were challenged with searching for the mechanism behind the cycle they wrote about in question 2d.  The directions were also written on the white board and are shown below: 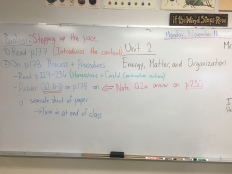 We entered the final chapter in Unit 1 with the Lesson 25 PowerPoint introducing students to the concept of classifying substances based on properties of matter like conductivity and solubility.  After slide 6 in the PowerPoint, students received the Lesson 25 Worksheet and then worked in groups of 5-6 students to test the conductivity and solubility of the substances listed on the worksheet.  By the end of class, students had compiled all of the data from the lab into the table on page 2 of the worksheet.  Note: rather than build conductivity testers, students used pre-built testers to obtain conductivity results.

Update – 11/17/15: We compiled a class data set from yesterday’s conductivity and solubility tests.  A few of the substances had mixed conductivity results across student groups, so we re-tested the conductivity of those substances using a conductivity tester constructed as instructed on page 1 of the Lesson 25 worksheet.